During the 2016 presidential race, the renowned linguist and political activist Noam Chomsky famously said the Republican Party is the “most dangerous organization” in human history.

He has added to his argument with his latest comments.

Chomsky originally said that Donald Trump and his Republican allies are failing to acknowledge and address the principal existential threat to humanity: climate change.

Not only is the Republican Party failing to address the threat. They are accelerating the race towards catastrophe in the interest of short-term profits.

Trump and his allies are “criminally insane”

Chomsky has now elaborated on these concerns in a recent interview with Scientific American.

He focused on a September 2018 report from Trump’s National Highway Traffic Safety Administration, which Chomsky says qualifies as “a contender for the most evil document in history.”

The report predicted the planet will warm by 7 degrees Fahrenheit (4 degrees Celcius) by the end of the century. This will certainly result in human catastrophe. Yet the current administration isn’t planning to do anything about it.

“It presented a rational argument: extrapolating current trends, by the end of the century we’ll be over the cliff and automotive emissions don’t contribute very much to the catastrophe – the assumption being that everyone is as criminally insane as we are and won’t try to avoid the crisis.”

He continued with his characteristically brutal summary:

“In brief, let’s rob while the planet burns, putting poor Nero in the shadows.”

Chomsky said the administration’s pursuit of money over human survival is a special kind of malicious:

“There have been many monsters in the past, but it would be hard to find one who was dedicated to undermining the prospects for organied human society, not in the distant future – in order to put a few more dollars in overstuffed pockets.”

He didn’t just reserve his scathing criticism for Trump and the Republican party:

“The same can be said about the major banks that are increasing investments in fossil fuels, knowing very well what they are doing. Or, for that matter, the regular articles in the major media and business press reporting US success in rapidly increasing oil and gas production, with commentary on energy independence, sometimes local environmental effects, but regularly without a phrase on the impact on global warming – a truly existential threat. Same in the election campaign. Not a word about the issue that is merely the most crucial one in human history.”

While the Republican Party is the most dangerous organization in history, according to Chomksy, its leader Donald Trump deserves special criticism.

“Take its leader, who recently applied to the government of Ireland for a permit to build a huge wall to protect his golf course, appealing to the threat of global warming, while at the same time he withdrew from international efforts to address the grim threat and is using every means at his disposal to accelerate it.”

This is the height of hypocrisy, saying one thing to the public about climate change and taking actions to protect personal wealth that are completely contrary to his public statements.

Do we need a full scale revolution or incremental change?

Chomsky was asked whether we now need a full blown societal and political revolution, or we should continue to pursue incremental change:

“Generalizations are misleading; too much depends on specific circumstances. But some have a fair degree of validity, I think. One is that there is both justification and pressing need for radical changes in the socioeconomic and political orders. We cannot know to what extent they can be achieved by incremental reforms, which are to be valued on their own. But unless the great mass of the population comes to believe that needed change cannot be implemented within the existing system, ‘drastic measures’ is likely to be a recipe for disaster.”

What do Americans think about climate change?

Chomsky makes a key point. He says that it’s essential a significant proportion of the general population know that “drastic measures” and “radical changes” are necessary.

Where do Americans stand on the issue of climate change?

According to a Gallup poll from early 2018, American conservatives are slightly more sceptical and less concerned about climate change issues compared with 2017. 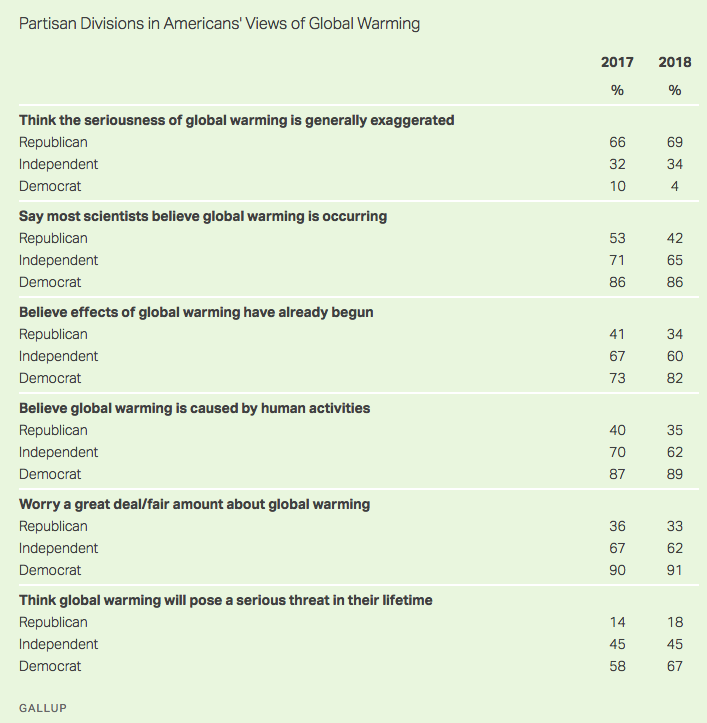 The likely reason is increased polarization on the issue, and continued sensationalism in the media.

Is there room for scepticism in the political discourse?

You’re reading this article on Ideapod. One of our greatest values is creating content that can be as valuable to people across the political spectrum.

It’s easy to have a knee-jerk reaction to climate change based on your political affiliations.

If you’re a “liberal” or “progressive”, you’ll probably be angry about the Republican Party’s stance.

If you’re a “conservative” or “right-wing”, you will probably be sceptical about the scientific consensus around climate change.

Yet at some point, we need to arrive at a consensus around the reality that our climate is changing, and it’s highly likely resulting from industrial civilization.

For example, here’s what Chomsky says about science:

“Hardly a day passes without new information about the severity of the threat. As I’m writing, a new study appeared in Nature showing that retention of heat in the oceans has been greatly underestimated, meaning that the total carbon budget is much less than had been assumed in the recent, and sufficiently ominous, IPCC report. The study calculates that maximum emissions would have to be reduced by 25% to avoid warming of 2 degrees (C), well above the danger point. At the same time polls show that — doubtless influenced by their leaders who they trust more than the evil media — half of Republicans deny that global warming is even taking place, and of the rest, almost half reject any human responsibility. Words fail.”

Wherever you stand on this issue, it’s essential that we accept the reality that radical change is needed in how society functions and how our economies work.

Let me know in the comments some of the ways you think we can create either radical or incremental change.