There’s nothing more infuriating than trying to figure out if a man likes or maybe even loves you.

What if I tell you there are 10 signs you can look out for in his eyes that will give his true feelings away?

Keep reading if you want to find out more!

First and foremost, let’s start with something more or less obvious.

When a man is in love with you, he will not be able to rip his gaze away from you, looking directly into your eyes the entire time.

At this point in time, he isn’t nervous anymore, he has deep feelings for you and doesn’t mind showing it.

To tell you the truth, at this stage you probably aren’t questioning his feelings anymore because chances are, he has opened up to you about them already.

Locking eyes with you is not only a sign of love but of respect, too.

You see, when people fail to meet our gaze or don’t bother to look at us when we speak come across as incredibly rude, and for good reason!

Looking directly at you is a sign that he is listening intently to what you have to say. Nothing is distracting him and his attention rests solely on you.

If you are experiencing this with a man, don’t worry about his feelings, he most probably is in love with you.

To be fair, this one is not far off from the first sign I just mentioned, but it’s still a bit different.

You see, prolonged eye contact can occur before a man falls in love.

In fact, it can be a means to an end – did you know that looking into one another’s eyes for a long time can make two people fall in love faster?

It’s true, and it can actually be a really sweet thing to do while you’re dating.

I once tried it with my boyfriend when we first started dating, I guess the fact that we’re still together 3 years later speaks for itself!

There’s a saying that the eyes are the windows to the soul and to a certain degree, it is absolutely correct.

When a guy holds prolonged eye contact with you, he is opening himself up to be vulnerable with you, he allows you to gaze into his soul.

Although it doesn’t mean that he is already in love with you, the idea doesn’t throw him off at all.

When you don’t like someone, looking into their eyes for a long time is incredibly uncomfortable.

With the right person, it’s no problem.

I’m sure you’re thinking “That means when he doesn’t look me in the eyes he doesn’t like me!”

Well, that’s actually not correct, either.

The truth is, when a man just can’t look you straight in the eyes it could simply mean that he has a giant crush on you.

It’s true, think about how you feel when you have a crush on someone.

Usually, the feelings are accompanied by:

Looking into your crush’s eyes is simply too nerve-wracking, so you avoid their gaze entirely.

Now: How do you know he has a crush and isn’t just being rude/disinterested?

Well, you’ll have to revert back to your intuition with that one.

Is he showing any of the other signs I just mentioned?

Does he genuinely show interest when you meet? Does he call you to set up a date?

If all of that is true, trust me, chances are good that this poor fella is just head over heels falling for you and too nervous to do anything about it…yet.

In that case, you could help him out a bit and make it clear that you feel the same. Some guys have a really hard time making the first move, so they need a little support. 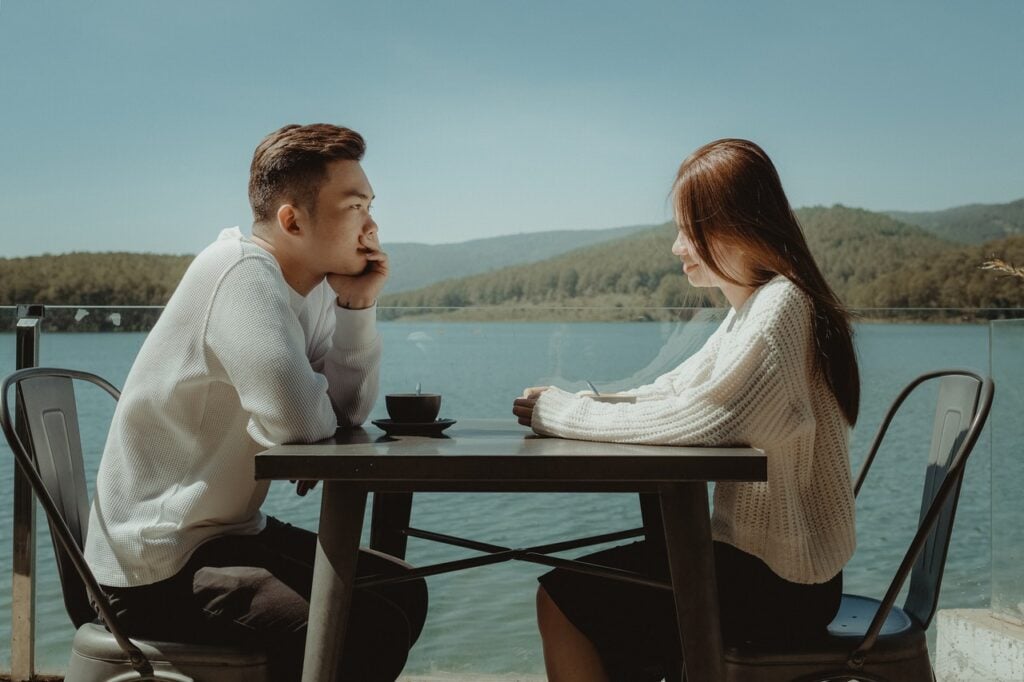 Have you ever dated someone and noticed that they are blinking rather rapidly?

Guess what? It’s probably not a nervous disorder (although that could also be the case).

Chances are, the man was simply extremely attracted to you!

I’m serious, rapid blinking of the eyes is a sign of attraction to someone.

If you’re not sure if that’s the reason for his excessive blinking, look out for other signs of attraction he might be showing:

Trust me, when a man shows any of the above and blinks rapidly on top of that, he is really attracted to you.

The problem? You will need to figure out whether he’s only sexually attracted to you or actually wants a relationship.

The thing is, if someone is super nervous around you, chances are good he actually likes you a lot and doesn’t just want you for your body.

I think you can already guess what this one means for a man.

We’ve all seen it, sometimes in an endearing way, sometimes from a gross guy across the bar, the suggestive wink, usually followed by a grin.

When a man winks at you, it really depends on context when you try to interpret his behavior.

Either way, a wink usually loosens up the conversation and more often than not indicates that he’d be down if you are if you know what I mean.

Now: can winking also be a sign of love?

Unfortunately, on its own, winking is more of a flirty move, not so much a sign of deep love.

That doesn’t mean that he doesn’t have feelings for you if he winks at you, but you’ll have to find other signs to determine how he feels, exactly.

Then he might just be trying to flirt with you!

Potentially he’s trying to actually ask you out and not just take you home, but that is something you will have to discern from his behavior.

When the guy you’re dating has dilated pupils a lot and you’ve ruled out the use of drugs (I’m just kidding … kind of), chances are he is in love with you.

You see, the so-called “love hormones” oxytocin and dopamine have an effect on the size of your pupil.

In other words, when you have strong feelings for someone, these chemicals get released into your brain, causing your pupils to dilate.

So, what does that mean for you?

When you are with a man and you notice his pupils are dilated a lot, he probably likes you a lot!

If you’re unsure about this sign, there are a few things you can rule out in order to be sure his pupils are dilated because of you:

You see, all of these have an effect on the dilation of the pupils, but if you can more or less rule them out, you’re good!

There is nothing more adorable than someone whose eyes literally light up when they see you.

Glistening eyes are – it comes as no surprise – a sign of very strong attraction or love.

When the man you’re dating gets this cute sparkle in his eyes when he’s around you, he obviously likes you a lot.

And the best part?

In the case that his eyes literally light up like that, it’s probably not just a sexual attraction thing, either.

On the contrary, he probably really really enjoys being in your presence because you make him feel good.

You see, everyone likes to be around people who make them shine from the inside, it’s what makes life so beautiful.

So, if you have that effect on a man, chances are he will not want to let you go anytime soon.

8) Staring at you when you’re not looking 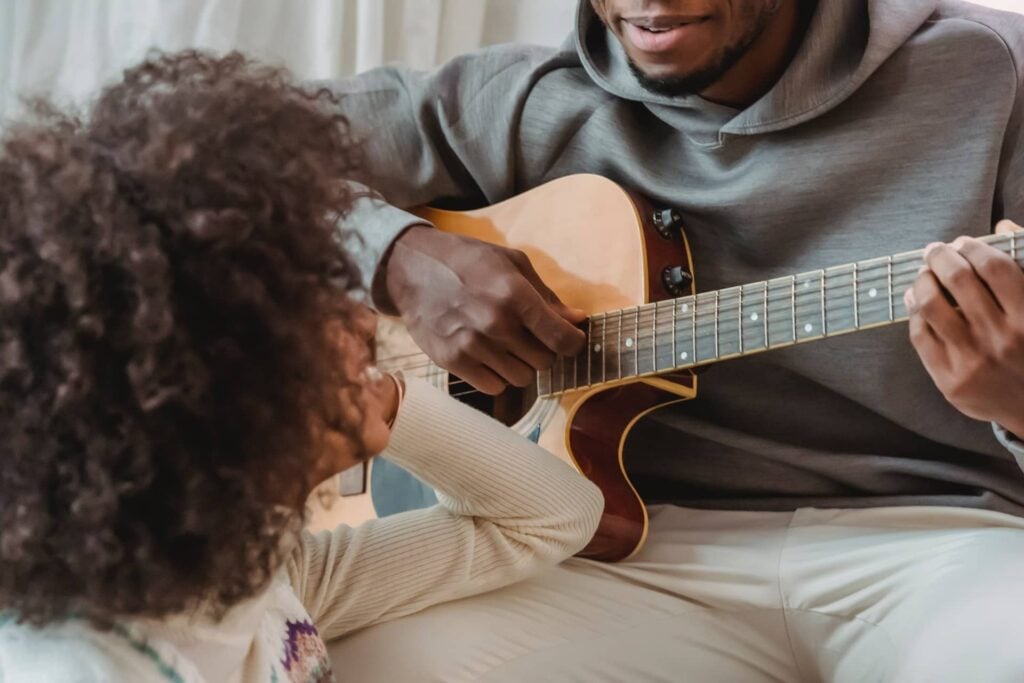 Have you ever noticed a man staring at you every time you look away?

This can be really sweet, like when you’re on a date, but it can also be a bit creepy when it comes from strangers in public.

In either case, the reason for their stares probably originates from the same sentiment: They find you incredibly attractive.

Actually, in that case, attractive is an understatement. These kinds of stares usually show up when someone finds you mind-blowingly beautiful.

You see, when you think someone is beautiful, they often look the most gorgeous when they aren’t even aware of anyone watching.

Those candid moments are exactly what your guy is looking for, as well.

Plus, the fact that even when you look away he can’t take his eyes off of you, of course!

In either way, you can rest assured that he definitely likes you a lot and finds you beautiful beyond measure.

9) When you’re hurt, their eyes say more than their words

For men, sometimes you can tell more about their feelings from their eyes than from what they say.

For instance, when you’re hurt or sad, the way he looks at you will give his true feelings away.

You see, when a man likes a woman and she isn’t feeling well, his eyes will suddenly get a depth that wasn’t there before.

He will look compassionate, and you might even find a hint of pain in them because he really doesn’t want to see you sad or hurt.

Once a man is at the point where your pain makes him feel bad, as well, he is way past the point of simply having a crush on you.

This man is seriously in love with you and his protector instinct is majorly kicking in.

You will notice him trying to find a solution to whatever problem you’re facing, trying to ameliorate the situation in one way or another.

While, as women, we often prefer to just have someone listen to us rant, know that him trying to “fix things” is his masculine energy trying to support you.

10) He looks at you differently

Last but not least, you will be able to tell a man loves you when he starts to look at you differently than he looks at anybody else.

To tell you the truth, this one is hard to explain, you can’t really put a finger on it, but something in his look will change when he develops real feelings for you.

You will notice a shift from pure flirty eyes to suddenly a much deeper, more intentional gaze.

In my own experience, you will realize that he is not looking at anybody else the same way. That’s when you know you have a special place in his heart now.

Simply put, he doesn’t have a crush on you anymore, he loves you deeply.

There’s a connection between his eyes and his love

To summarize, there is a definite connection between how a man looks at you and his feelings.

Pay attention to the signs mentioned. If you notice that he is portraying one or more of them, there is definitely something going on and he isn’t indifferent to you.

How deep his feelings are and what his intentions turn out to be is something you will have to find out through time, context, and talking to him.

You see, there are countless signs you can look out for, but in the end, the most surefire way to find out how he feels is by just asking him.

The thing is, if he truly likes you, he’ll be happy to tell you, and if he only wants sex, it’s better you find out sooner rather than later.

In my own experience, these tips are really fun to know, as they will open up your eyes (no pun intended) to how many men find you attractive in your day-to-day life!

Freelance writer specializing in holistic health, wellness, and psychology. Check out my blog to find out more https://www.fullyholistic.com/!